Listed below are just a sample of the animals RepTyler’s can bring to your event – We currently have 27 different species of exotic animals and over 150 animals in total!!! Here just a few……….. 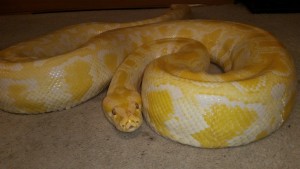 The Burmese Python is one of the larger species and is ranked as the 6th largest of all snakes in the world. They don’t have venom but that doesn’t mean a bite won’t hurt! In the wild this reptile is a major threat to anything or anyone that gets in their way, however, our captive bred giant is very friendly and isn’t interested in hurting human beings unless taunted or frightened by us or if we smell of food!

The average length of Burmese Pythons is 12 feet long but they can end up being much longer – growing up to a massive 23 feet. In the wild they can weigh up to 200 pounds but Arnie is a mere 44 pounds. The yellow colouring and reddish eyes makes this guy an Albino. 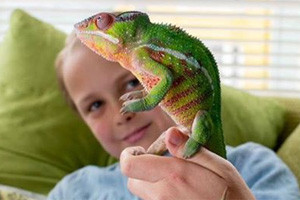 Species: Panther Chameleon
From: Madagascar
Fun Fact: Fruitella has a really long tongue and change his skin colour to suit his mood

The Panther Chameleon is a spectacularly coloured lizard. They come in many shades and degrees of brilliant blues and greens, and even black and can also have vertical bars of reds and blues. And as with any chameleon, watching their colour change is always fascinating.

Panther Chameleons are moderately-sized lizards, typically males will reach about 17″ in length, though they could reach up to 22″. The males are more vibrantly coloured than the females, though the colouring they have varies depending upon the region where they originate. Females, no matter what region they come from, tend to be brown or tan, sometimes with patches of pink or bright orange. They also have excellent sight and can launch their tongue out up to 26 times the length of the body to catch prey! 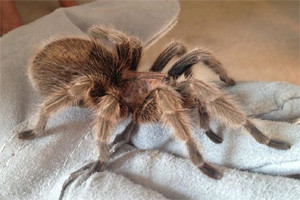 Species: Chile Rose Tarantula
From: Chile
Fun Fact: They have 8 legs and turn upside down when shedding their skin

The Rose-haired Tarantula is one of the most docile and hardy spiders being kept. In captivity. It is a very durable tarantula, originating from one of the driest scrub habitats in the world

Chilean Rose-haired Tarantulas are moderately large and quite stocky . They have a leg span reaching about 5 inches. They are coloured in a dark brown to black but then covered with a coat of reddish-orange to pink hairs over the entire body. Their various common names are derived from this subtle rose casting on the hair. 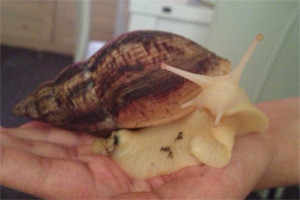 Species: The Giant African Land Snail
From: Africa
Fun Fact: They can choose their gender when mating, either male or female!

The Giant African Land Snail is one of the largest of all the terrestrial species out there. It is very rare that you will come across one but if you do pay close attention to the very unique markings that they offer. They have a light to dark brown shells with vertical stripes of a darker shade of brown on them.

They can range in size from about 3 inches long to about 8 inches long. They have an average life span of about 5-7 years. When they have enough food and the weather is comfortable, they tend to live much longer. Some of them have been known to live up to 10 years. 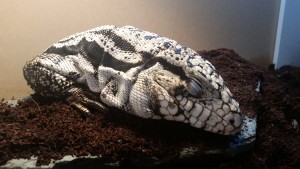 Species: Monitor Lizard
From: Argentina
Fun Fact: Tegu’s are able to run on their back legs

There are seven species of tegus that belong to family Teiidae. They can be found in South America and southern parts of North America. Tegus can survive in various habitats: rainforests, savannas, swamps, meadows, open fields…. Different species of tegus (especially Argentine Black & White Tegu) are often kept as pets because of their friendly nature. Tegus are often hunted for their skin and meat.

The Tegu is a large lizard and males are bigger than females, usually reaching 4 ½ feet in length with females averaging 3 feet in length. Tegus can weigh in excess of 50 pounds. The body of a Tegu is covered with beaded skin. The basic colour of their skin is black with yellow dots that stretch from its neck to the tail. Young tegus are green with black marks. The green turns into white after couple of months and adult colour develops usually after the second year. 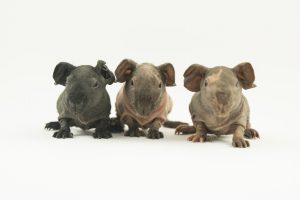 nny pigs originated form a basic hairy guinea pig. In the 1990’s, in America, animal testing was at its highest. The skinny pig was a genetic mutation and created by accident. Now people seem to love these odd, ugly but graciously beautiful looking mammals.

Skinny pigs are very friendly but shy creatures with no fur the skinny pig must live indoors and be kept warm at all times as they are very sensitive to hot and cold.